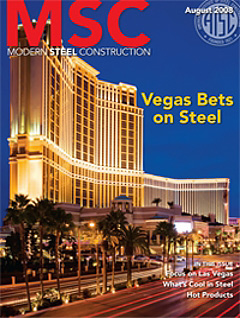 “The project is notable as the first in Las Vegas to use BRBFs. Furthermore, according to CoreBrace, who provided the buckling-restrained braces, this is the largest U.S. structure to date to be constructed with a BRBF system; almost 600 braces were used in the building. The bolted connections used with the BRBF system shortened the erection schedule, eliminated field welding, and reduced construction cost. According to the steel fabricator/erector, SME Steel, using the BRBF system with bolted connections saved approximately $10 million over a concrete shear wall system. The structural steel was erected in approximately eight months.”